ARMCHAIR ENTHUSIAST 4 : IMSA – End Of One Era - Start Of Another 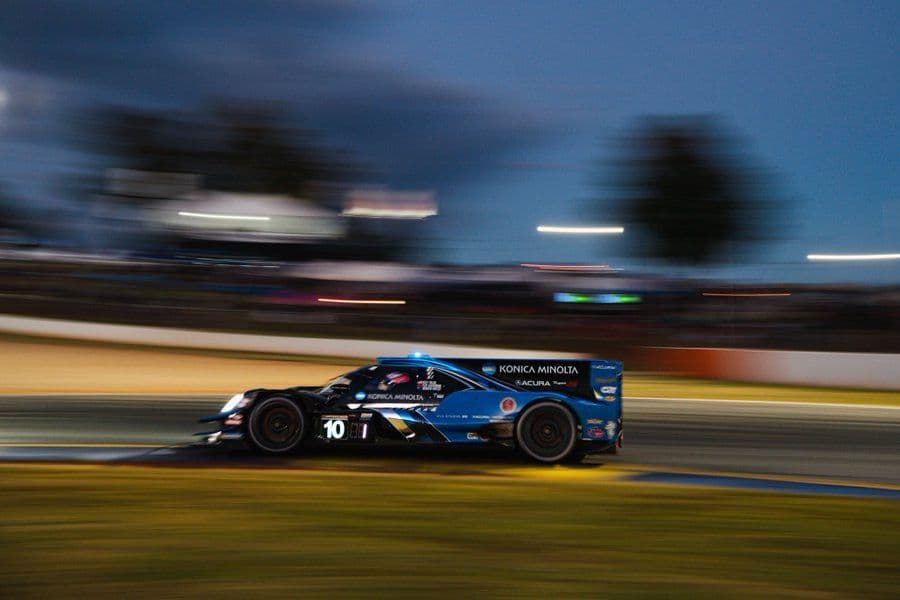 Making for some great viewing over the past few seasons, the IMSA series in America produced an almost agonisingly nail-biting end to it's season , and it's current "Daytona Prototype" era with a  riveting 10-hour race at Road Atlanta last month.

This was the “Petit Le Mans”,  a race instigated by the late Don Panoz in the days when his eponymous GT and prototype cars were front runners at the actual, full length Le Mans. The race traditionally brings the IMSA (and before that the American Le Mans Series) season to a close with a race that runs into the hours of darkness on a compact and very picturesque circuit of the old-school. By that I mean there are trees, and gradients, the barriers are close enough that you don't need a map to find them and the infield is grassy and packed with campers and RVs. There arn't enormous banks of flood lights so it gets properly dark. It is a ‘proper’ circuit and it can bite!

This year's running offered a three-way battle for the championship between a Cadillac and a brace of Acura cars from rival teams. It was the culmination of a cracking season of racing, which anyone can follow on the series YouTube channel or via the invaluable live commentary feed on the RSL, which is also host for the legendary Radio Le Mans service that keeps English-speaking spectators at the track fully informed of what's happening at all times.  RSL's IMSA commentary is the one you hear on all the  YouTube broadcasts, supplied by the ever-enthusiastic John Hindhaugh and team. The idiosyncrasy here is that although it's ‘IMSA Radio’ and thus covering an entirely North American-based series, it's almost entirely staffed by British commentators: Jeremy Shaw, Andrew Marriot, Jonny Palmer and others.  Ever enthusiastic pit reporter Shea Adam , daughter of Canadian IMSA racer for the 80s, Bill Adam, is the only notable exception.

At the front were a slim but quality field of just 5 regular Daytona Prototypes : Two Acuras and three Cadillacs (the number bolstered by a few extra cars at some events during the season). Behind them a field that followed the pattern of the European Le Mans Series (ELMS)  :  LMP2s and LMP3s with GT cars completing the field, but far from just making up the numbers. Porsche. Mercedes, Aston Martin, BMW, Ferrari and Chevrolet were all represented and the race-within-a-race for class honours blazed all year . So the look of the IMSA series is broadly that of ELMS but having watched both this season I have to say IMSA is better entertainment.

From an armchair viewer's point of view it's superior in three aspects. Firstly those Daytona Prototypes. They may have been small in number this year, but they offered a different look and sound . The barking V6 Acuras and thundering V8 Cadillacs provide that degree of individuality and charisma that the LMP2's, a spec formula, never can.  Secondly the venues. The season began with the bumpy but brilliant Sebring airfield circuit, took in the streets of Long Beach , the swoops of Mosport and the autumnal tints of Watkins Glen (all former F1 venues) the towering gradients of Laguna Seca and the island roads of Detroit (both long-time Indycar venues)  on course for the denouement among the trees in picturesque Atlanta Georgia. They too have more charisma than some of the fine, but bland modern circuits on which the ELMS often runs. It helpoed that the circuits themselves  often playing alternately to the strengths of each manufacturer : Laguna was an Acura track, Long Beach suited the Cadillacs . The final piece of the jigsaw is variety in the race lengths. Mostly a little over 2 hours duration, there are also rounds of 10, 12 and 24 hours in duration. That mixes things up nicely, makes the strategies unpredictable and extra guest drivers add further variety.

For almost the entire ten hours, the Petit Le Mans was gripping and the title went down to the final half hour. If you fancy watching, it's all on YouTube. But you do need a spare ten hours! Well… you can skip through the yellow flags and safety cars (there were quite a few)  so maybe eight hours.

Of course that was 2022 and what represents the end of one era in IMSA. Next year is the start of a new one with the WEC  Hypercars  (LMH)  and the new IMSA  GTPs (LMDh ) classes replacing the Daytona Prototypes.  Although the IMSA GTPs are not exactly the same as the WEC cars they do both race together and there is little visually to tell them apart.   In short, Hypercars are a bespoke clean-sheet design while GTPs are based on specified list of proprietary chassis options to keep costs down : the BMW is built on a Dallara chassis, the Lamborghini on a Ligier etc etc. This  video fully explains the differences.

After so long on divergent paths we can't have everything to be fully aligned I guess? No doubt some serious Balance Of Performance tinkering will be invoked to level things up and this should permit the two series to mingle easily . It's already resulted in a rash of projects from major manufacturers. In the WEC the existing teams of Toyota, Peugeot and Glickenhaus will be joined by Ferrari in 2023  while IMSA will add Porsche, BMW , Acura/Honda , Alpine/Renault and Cadillac to the pool. This offers up a diversity of big-name car maker involvement unseen in a generation. Even if it is a bit complicated working out what goes where and why, the bottom line should be a healthy and diverse entry in the top classes at the major events worldwide. And it will get even better.  Other Hypercar/GTP projects from Lamborghini, Isotta Fraschini , DeTomaso and Vanwall(ByKolles) are due to appear in the next year or two and one from Bentley is also being talked about for 2025. The future looks bright...if a little complicated.

If Petit Le Mans 2023 sees a showdown between the new era of GTP cars even half as dramatic as this year's race we are in for a treat at the end of a tantalising season.

NOTE: Photos used in the article are for information purposes only taken from team or manufacturer public sources where no restriction of use is indicated. We are happy to immediately remove any photo at the owners request